After months of waiting, I finally received the welcome email on the VirtuGO Beta Testing Program in early April 2018.

For those not aware of VirtuGO, it is a virtual training platform that has been opened for beta during the Tour Down Under 2018.

Given this software platform is still in its development cycle, issues encountered during trial are inevitable.

The VirtuGO virtual training platform is one of the brands owned the Denmark based Virtu Cycling Group.

Headed by CEO Michael Rogers, a former three times Time Trial World Champion from Australia, the VirtuGO virtual training platform is targeted to be positioned between consumer based gaming products like Zwift and those high-end cycling training products like TrainerRoad.

The registration for open beta started in January and with a target of around 1000 users participating in the beta testing.

The VirtuGO system is supported on the following platforms:

It currently only supports FE-C trainers and ANT+ sensors. Bluetooth LE support is still in development.

For the initial trial, I will be using the following setup:

In addition, the following trainer and sensors will also be used:

Users can customise their look (Avatar) and the bike they are riding from a small selection of choices.

This is my chosen avatar and bike: My look in the VirtuGO platform My gear in the VirtuGO platform

I believe the selection will be expanded in the final release.

Upon receiving the VirtuGO Beta Testing Program email, you are advised that an email from the VirtuGO beta testing community website will be sent to you which will direct you to create an account and downloading of the required program codes.

Shortly you will receive an automatically generated email from the VirtuGO beta testing community website.  This email will contain a link that when clicked will take you to our website and prompt you to create an account. It is only upon successfully creating an account on the community website you will be able to progress to step 4.

Now that you have successfully created your community account navigate to the downloads page. Click on the installer of choice and proceed with the installation. VirtuGO will automatically update itself to the latest version. On average the entire install process takes between 30-45 minutes depending on the speed of your computer and internet connection.

In reality, like most of the beta testing users, I have not received any further email from VirtuGO. To start the trial, you simply follow the steps below: To start VirtuGO double-click the VirtuGO icon. Select a screen resolution and graphical quality of choice – keep in mind that “Beautiful” and “Fantastic” settings require a high-end CPU & GPU. Finding the optimal settings for your computer may require a little trial & error.

You are now ready for the trial.

During startup of the VirtuGO beta program, it will detect if any latest update is available and install it automatically. 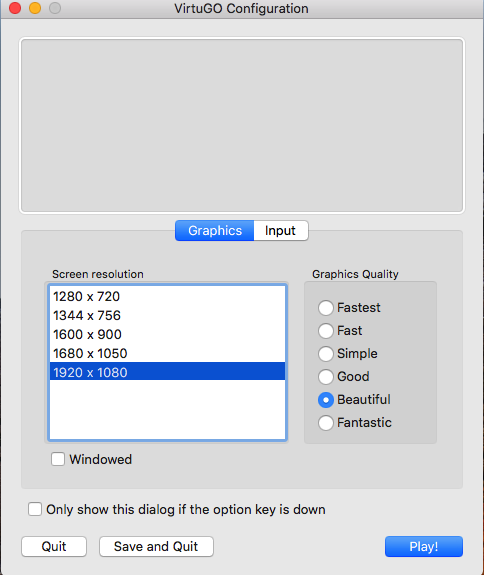 I even tried the “Fantastic” option and seems like no deterioration in the overall response is observed.

From the “My Profile” menu, you can set your weight and the FTP.

Your ride history and summary statistics are also available here. 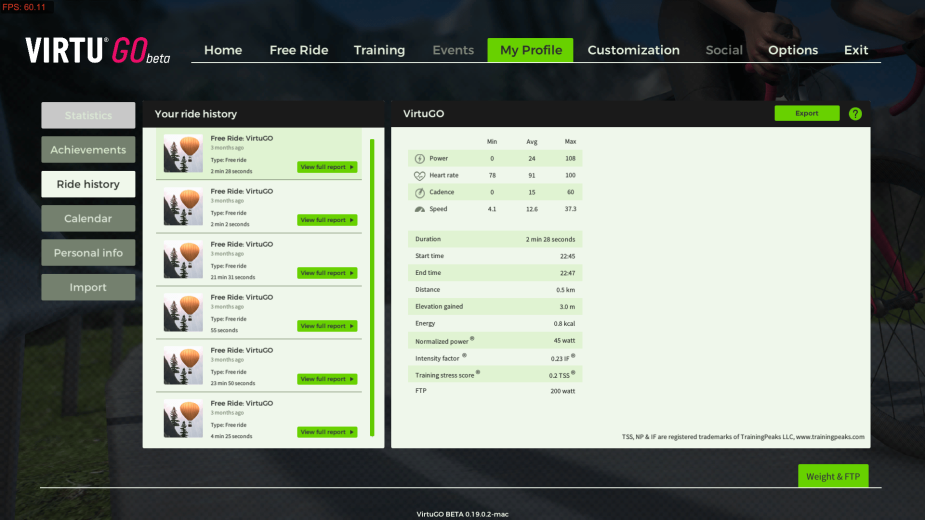 To change your look and your bike setup, click on “Customisation” menu and make your choice as discussed before.

Unlike other virtual cycling systems like Rouvy that come with lots of real/virtual routes, there are only three virtual routes available in VirtuGO. 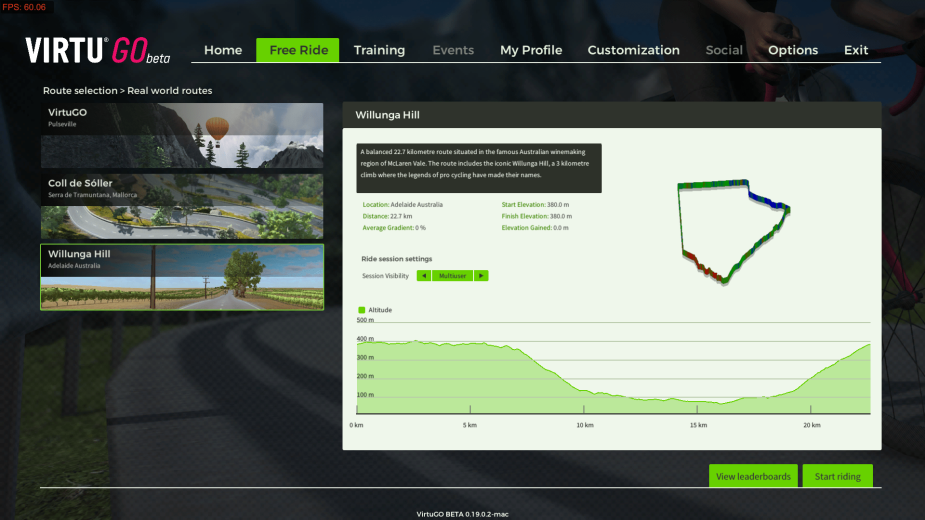 I have selected the first one, a short 7.7 Km route VirtuGO in an imaginary place “Pulseville”, as warm-up and to familiar with the platform interface.

Upon startup of the free ride, all those activated trainers and sensors were detected.

On accepting the equipment, the free ride would be started.

There are a total of five camera view switchable via hot-keys. 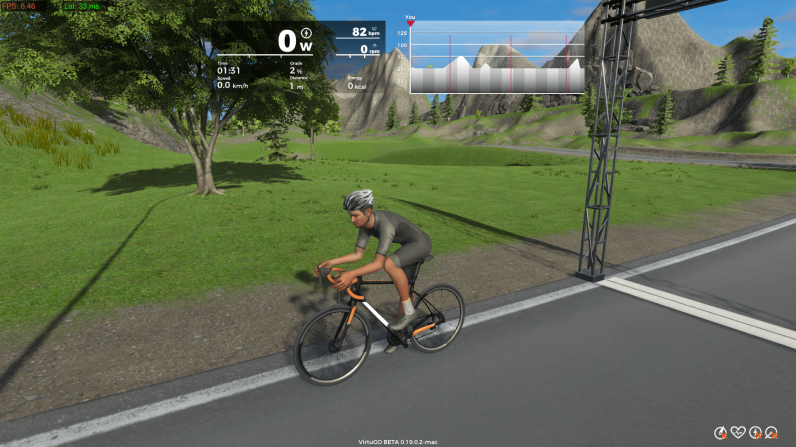 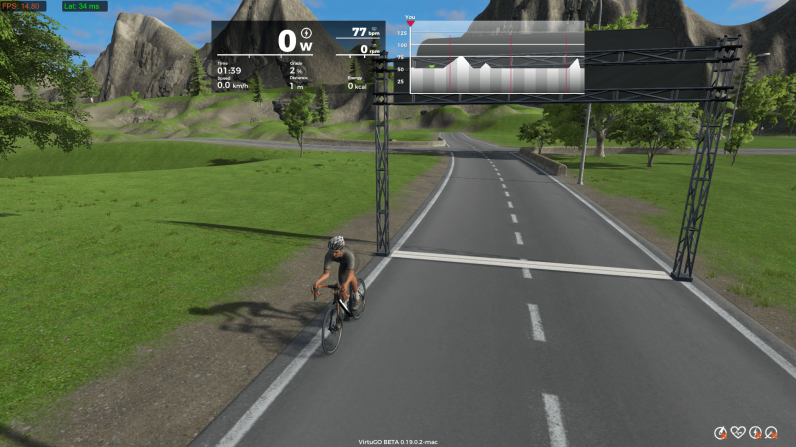 My personal preference is the fifth one which looks more realistic and make my feel great. 🤣

The VirtuGO user interface is quite clean without too much information spreading across the screen. Statistics normally found on bike computers are shown in the top left box while a route profile summary is at the top right.

Your current position is shown with the marker “You” while other riders are shown as inverted triangles. Faster riders in front of you are in green and those after you are in red.

During the course of any free ride, VirtuGO will alert you on approaching the beginning of a KOM or Sprint segment (terms borrowed from Strava) as well as providing dashboard statistics on segment completion. 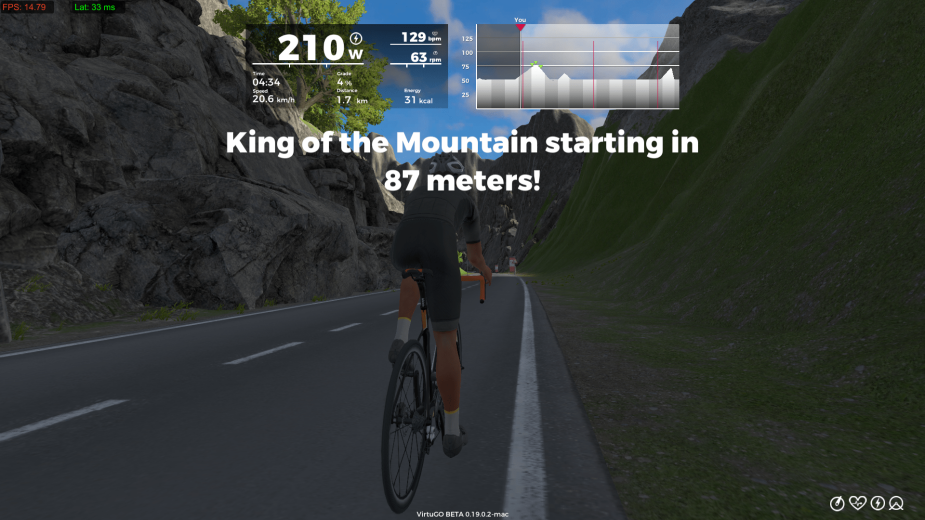 Upon ride completion, session statistics and segment leaderboards would be generated for review. 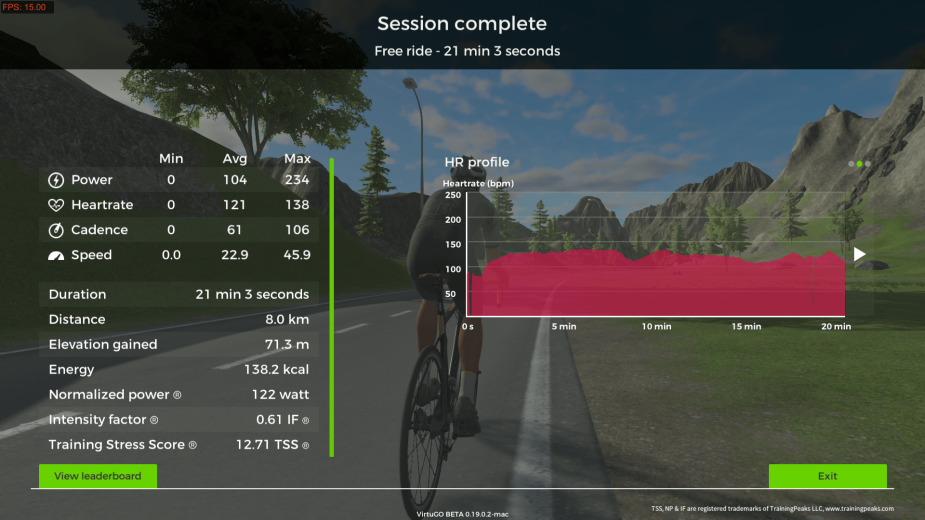 Noticed that there is NO permanent copy of all these detailed session statistics kept by VirtuGO.

Fortunately, integration with Strava is available. Riders may use the uploaded riding statistics for subsequent analysis. 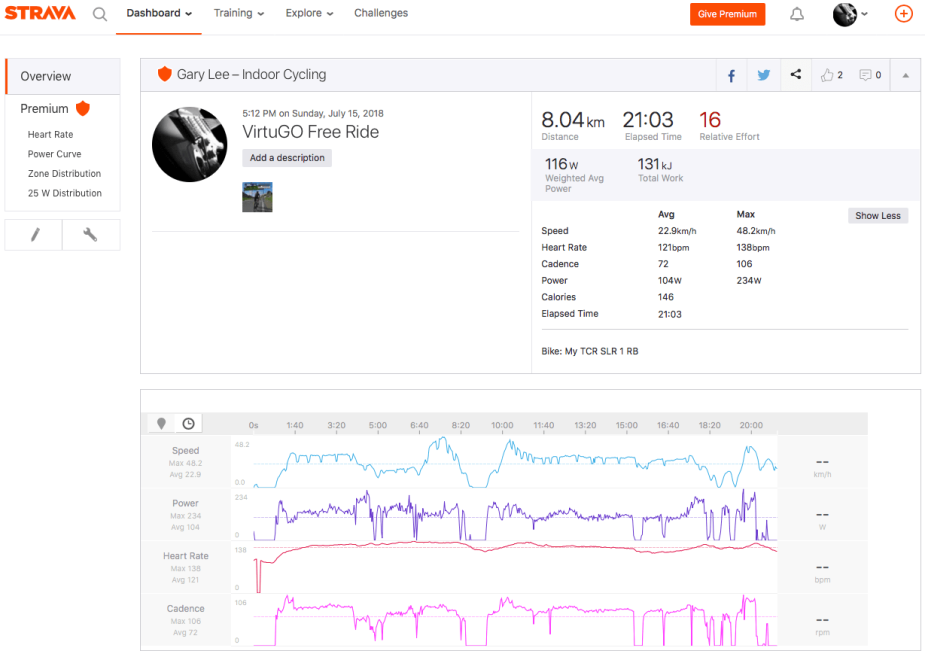 By the way, GPS/track information are only available for rides along actual routes like “Coll de Soller” and “Willunga Hill”.

Next followed by the 22.7 Km Willunga Hill route adapted from Tour Down Under (TDU).

Willunga Hill is not a very long route but there are numerous small up-and-down climbs in the initial seven Kilometers. The most demanding part is the last three Kilometers climb along the Old Willunga Hill Road. Average gradient is 7.5% while the maximum gradient is around 10.5%.

At the end of the Willunga Hill ride, I have encountered a failure in sending the workout data to the VirtuGO server. No matter how many times I have clicked on the “Try again” button, the problem still persisted and I have no other way except giving up with the “Exit” button.

How frustrated am I after a hard riding! 😫😫

It turned out that I’m not the only one who has the upload issue.

“Failure to send the workout data” alert screen. This is a similar screen capture by another VirtuGO beta user as I forgot to take a screen short at that time.

Anyway, my initial rides with VirtuGO are highly enjoyable. Hope that those problems/issues will be rectified in the final release.

Based on the short rides of 30.4 Kilometers, my initial feelings towards VirtuGO are:

What I am concerned:

Other things I want:

As mentioned earlier, VirtuGO is a designed to be a virtual training platform. The platform already comes with an intensive library of training program for various types of training objectives. 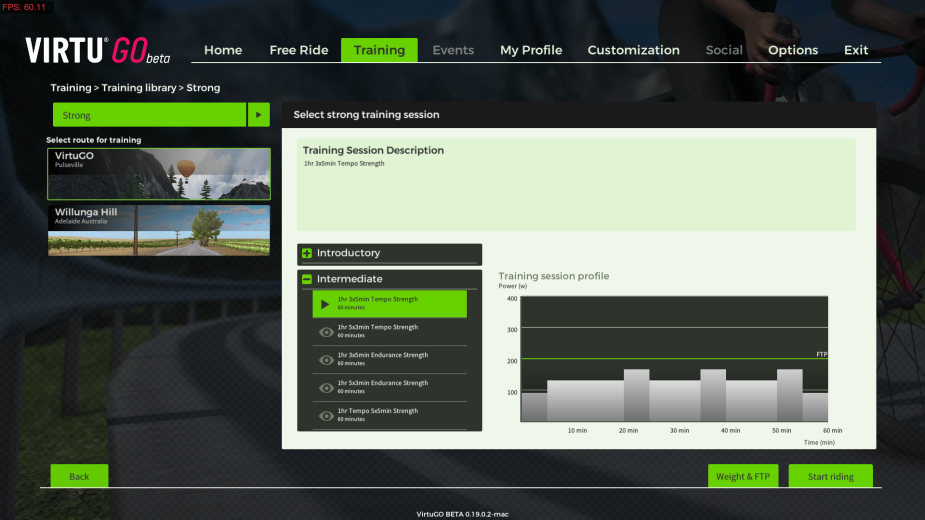 There is also a personal training program for the subscribed user. It currently comes with a 4-week intermediate program for users who would like to be trained as a strong rider. 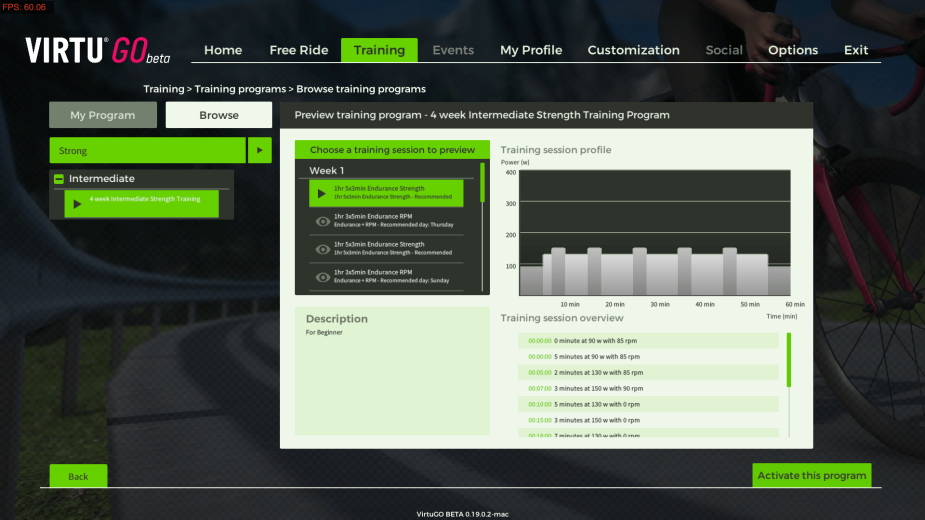 I will arrange further trials on the built-in training library. Stay tuned.