Round the Hong Kong Island 徒步環香港島

Two years ago, I took another challenge – Walk around the Hong Kong Island in one day.

Shortly after I had completed my round-the-island cycling in Taiwan in late 2015, I felt a little bit desperate and would like to look for another challenge of my life. One day while I was surfing the net, I found a young Taiwan undergraduate who spent over 40 days to walk around Taiwan all by herself. All of a sudden, an idea came to my mind – I could do this as well, of course, just in Hong Kong.

I immediately called two of my classmates who rode with me in the last cycling around Taiwan trip. Without any hesitation, they both responded with “Why not!” and our target is then established.

With some information collection and planning works, detailed routes and timeline for the “Single-Day-Walk-around-the-HK-Island” trip had also been finalised.

Hong Kong Island is a very small place and a round trip takes about 63 Kilometers. Assuming an average pace of 4 Kilometers per hour plus meal/rest time of another three hours, it was expected that we should be able to complete the round trip in 18 hours. Since MTR would be our primary means of transportation, the trip should also be started and completed after 6am and before 1am respectively. Moreover, for safety concern, we should also be back to the city area before 6pm in the evening. In view of these considerations, we have worked out an anti-clockwise route with Kennedy Town MTR station as our starting point.

It was windy and cold in the early morning of 23 Jan 2016. After having a bowl of hot minced beef congee and rice roll near the Kennedy Town MTR station, we started our wonderful journey along the Victoria Road.

Right next to Villa Cecil, there was a staircase leading to the seaside. Thinking that walking along the shore would definitely match our idea of “Round-the-island”, we quickly run down the staircase and enjoyed the stunning sea-view. There were some ropes tied along selected portions of the trail where it might be difficult to walk or dangerous. We believed that the ropes were prepared by others to assist hikers.

Moving along the shore and under the flyover, we soon arrived in Cyberport. At the end of the Waterfront, we climbed over the fence and went straight into the Waterfall Bay Park. It was these two short-cuts that saved us considerable time to Aberdeen.

The early portions of the journey were relatively easy to achieve. Partly because they were closed to the roadside and partly due to that fact that we were still at our peak condition. We followed our plan and made some good progress – moving along Aberdeen, Deep Water Bay & Repulse Bay on time. Care should be made in finding the trail to Chung Hom Kok from South Bay Road. The entrance is located at the steps on the left hand side of South Bay Road. By 11:00 we arrived in Stanley Promenade.

After having simple lunch and a short break near the Stanley Market, we continued our journey along the Stanley Village Road. 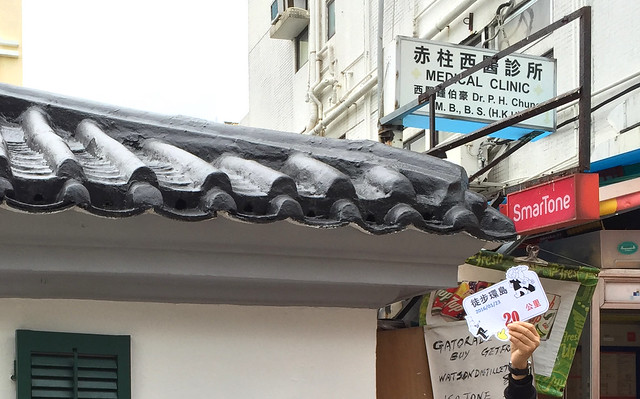 The most direct way to move from Stanley to Shek O is walking along the Tai Tam Road and Shek O Road. Unfortunately, since there is barely any pavement along these two roads and walking along them on a busy Saturday is an extremely dangerous action to both the drivers and ourselves. We take the alternate way by climbing onto the “Lo Fu Shan Catchwater” which would take us to the Tai Tam Country Park South Entrance and then continued with section 7 of the Hong Kong Trail. Entrance to “Lo Fu Shan Catchwater” is next to the Stanley Mound Pump Station and it takes about 10 minutes of walk along the Stanley Gap Road from the Tai Tam Road round-about.

The “Lo Fu Shan Catchwater” is built along the hill of Tai Tam Country Park. The trail is quite narrow and not properly paved. Portions of the trail are also on steep slopes without any fence. Extreme care should be made when moving along these areas. Despite of the toughness of the trail, you will have a wonderful view of the Tai Tam Bay and D’Aguilar Peninsula.

Another old classmate joined us at the Tai Tam Country Park South Entrance. Four of us then moved to the Hong Kong Trail – Section 7 along the Tai Tam Tuk Village. The Tai Tam Reservoir main dam is a hotspot for photography and we also came across a crew of photographers taking bridal shots there.

This was my first time hiking along Hong Kong Trail – Section 7 and it was quite easy to walk. Personally, I think the scenery after moving into Lan Nai Wan is much better as there are not much bushes to block the view.

We also made very good progress and arrived at Shek O Road at about 3:30pm. As usual, let’s do a check-in first at To Tei Wan.

We felt a little bit tired after hiking for about 30 Kilometers and took a short break at the bus station next to the To Tei Wan entrance along Shek O Road.

Just when we planned to resume our journey, something terrible came to us – our legs were so tired that we could hardly move. It took about 20 to 30 minutes of struggling before we could attain our original pace. Luckily, there was not much impact to our schedule as we managed to speed up along the down-slope walk along Shek O Road to Big Wave Bay Road.

By the way, never stop a running machine!

After taking some snacks and a big bottle of Coke at a small cafe in the Big Wave beach, we went up to the Pottinger Peak Country Trail along the steps next to the BBQ area. Despite the view of the Tathong Channel and Big Wave Bay are surprisingly good when you moved up to steps, I was so tired and struggling with this “Staircase to heaven” that I didn’t have the mood to enjoy it.

At the end of these thousand of steps is the “Pottinger Peak Country Trail” and the “Leaping Dragon Walk” that brought us back to city area in Siu Sai Wan.

With over 40 Kilometers of mixed city/country walk, we sat down and have a great & relaxing dinner at Heng Fa Chuen. By taking the fast-path along the road side of the Eastern Corridor, we continued our journey to Shaukeiwan, Sai Wan Ho, Quarry Bay Park, North Point and Causeway Bay as planned. Of course, no big surprise in the city.

With the “Central-Wanchai Bypass” project work that were in full force, we had to follow those temporary pavements built along the waterfront near the Cross Harbour Tunnel in Causeway Bay to Wanchai.

By the time we reached the Hong Kong Convention and Exhibition Centre, we had already walked for over 55 Kilometers and were totally exhausted both physically and psychronlogically. If we were to continue the remaining 5 Kilometers as planned, it probably took us at least two more hours.

Since we have to catch up with the last MTR home, we have no other choice but to give up at the Admiralty MTR station by 10:;30pm.

As a recap, we had spent around 15 hours in achieving a total of 58 Kilometers, five more Kilometers to go in order to complete the “Single-Day-Walk-around-the-HK-Island” journey.

I took some rest while on my way home. By the time I arrived, my legs were so tired and weak that I could hardly get off the MTR and walk up to the station concourse. Moreover, it also took me a full day of rest in order to recover.

In view of my current physical and psychological conditions, I think this “Single-Day-Walk-around-the-HK-Island” challenge is:

Anyway, I strongly believed that not everything can be left to tomorrow. Seize the day to try and make your dream comes true.

All Rights Reserved.Unauthorized use and/or duplication of this material without express and written permission from this site’s author and/or owner is strictly prohibited. Excerpts and links may be used, provided that full and clear credit is given to ‘MyNewChapterInLife’ and ‘MyNewChapterInLife/mynewchapterinlife.blog’ with appropriate and specific direction to the original content.

Tagged as: Hong Kong, Round the Island